Last reforestation campaign for Jacob Amédée MIARINJARA, 70 years old, a geographer engineer by training. An exemplary curriculum, after Jacob’s teaching, naturally turned towards the environment and the management of ecosystems.

First as a project manager at WWF, then as the manager of the Ankarafanska Park, a jewel of the International Conservation in Madagascar, one of the most beautiful natural reserves of fauna and flora. Later Jacob worked as project coordinator at GIZ (German Cooperation) in the north of Madagascar for sanitation and access to drinking water for the population.

In 2009, the EcoFormation project in Bekoratsaka presented itself as a new opportunity, moreover since the reforestation area involved his native village of Andrafiakely.

Without hesitation, Jacob took up the project, which he was able to popularise, present and defend to the villagers (8 villages and 22,500 inhabitants). Jacob’s goal: to mobilize the inhabitants of the rural commune of Bekoratsaka to take natural ownership of the reforestation, agroforestry and biodiversity restoration project. 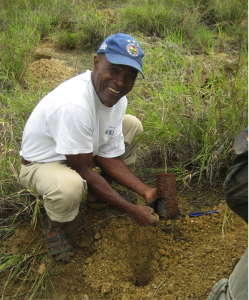 It was no easy task, during 14 months, from village to village workshops (42) and information sessions (31) were organized, a remarkable translator who presented the EcoFormation concept to the villagers, an outstanding animator and organizer who captured everyone’s attention.

In 2011, a 7,400 hectare reforestation area was transferred by the Malagasy State to the AVOTRALA Cooperative. The members are the villagers and farmers of the villages involved in the project. Jacob was appointed President of the Cooperative, an organization he led for 10 years, surrounded by local natives (Members of the Board of Directors).

Last year Jacob stepped down from the Presidency to oversee and coordinate the operational activities of the project. Unfortunately his health was affected so for a few months our local partner and former President had to lift his feet to be hospitalized.

Since a few weeks Jacob has been with us again, active, tirelessly and like a young man he crawls around the field for many hours under the 37° Celsius sun, pulling behind him the young technicians and engineers, who in the evening are exhausted !

So dear Jacob, we still need your skills, spare your health, even if your Zebus (a great collector), your rice paddies and especially your bees fascinate you, let’s finish together this wonderful reforestation project, even if it proves difficult to find the last deniers to finalize this crazy adventure !