You are here: Home / News / June 2019: How can coal consumption be reduced

This is done with ADES fireplaces, providing a “cooker”, to cook and in some cases temper the boxes in the cool season. 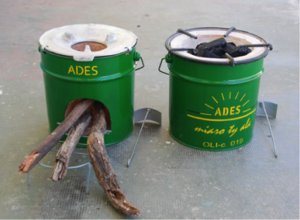 ADES, another long Swiss story; in the 2000s, Ursula Oschner, the founder of ADES (Association for Solar Development) introduced solar cookers in Madagascar and then developed the production of these cookers in the south of the country.
Unfortunately, the brake on deforestation had not yet been found, however, a solution for using less charcoal was emerging. Solar energy is good but still expensive, so Ursula chose with the help of friends to develop very economical wood and charcoal fireplaces by reducing consumables by 65% and improving the calorific performance of the fireplaces.
Thus we decided, with the support of the canton of Geneva, to introduce in the whole reforestation area (9 villages) these economical stoves which are proving their worth in other regions. We have chosen the left-hand model OLI-b 45, a furnace to be used with twigs collected during logging. As for the price, we will sell and donate ovens at the equivalent price of local artisanal fireplaces (5’000 Ar).